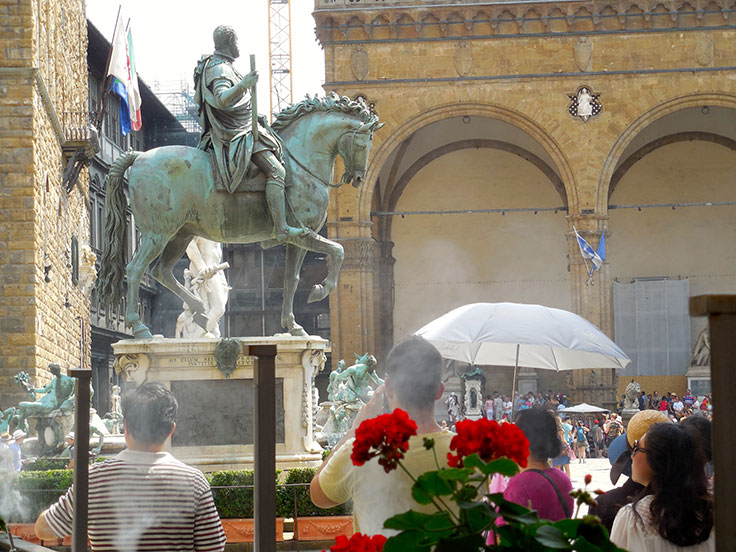 Of course any Italian deck would make a great gift for anyone, but for those more interested in the stylistic differences of Italian regional decks here is a quick description:

How to Play Scopa

Scopa is favorite game of Italians and Italian Americans. The word “scopa” means “broom” in Italian. Points are awarded in a variety of ways, but one of the best methods to obtain a large number of points at once is to sweep the board. This is known as a “scopa!” and the name of the game comes from this move.

To begin the game of Scopa, a dealer deals three Scopa cards to each player, one card at a time. The dealer will also place four Scopa cards face up on the table. (Note: an opening scopa board of 3 or 4 kings is considered illegal and the cards are reshuffled and the dealer deals again.)

It is not legal to place a card on the table that has the ability to take a trick. If, for example, a 2 and 4 are on the table, and a player holds a 6, the player must either take that trick, or play a different card from his hand.

After all players have played all three cards, the dealer deals out three more cards to each player, again beginning with the player to his right. That player then begins play again. No additional cards are dealt to the table. This process is repeated until no cards remain in the deck.

A Scopa is achieved when a player takes a trick and removes all of the cards from the board. The board is empty at this point and the next player is forced to discard a card into the board, since there is not an opportunity to take a trick. A Scopa trick should be noted separately during the game, since a player making a scopa will receive one point. Some players stack their trick sideways, upside down or in a separate pile to track a Scopa until the end of the deal.

After the dealer has played the final card of the final hand of the round, the player who most recently took a trick is awarded any remaining cards on the table. After the last card of the round has been played, points are calculated for each player. If no one has won the game, the deal moves to the right. The new dealer shuffles and deals the cards as described above.

Scopa – How to Keep Score

The “prime” for each team is determined by selecting the team’s “best” card in each of the four suits, and totaling those four cards’ point values. When calculating the prime, a separate point scale is used. The player with the highest number of points using this separate point scale gets one point toward the game score as listed in (d) above.

For example, if one team captures the sevens of Cups and Coins, the six of Clubs and the Ace of Swords, that team’s prime is (21 + 21 + 18 + 16) = 76.
Other versions of the prime’s point scale exist. Most use the same ranking of cards but have variant scores (e.g. 0 points for face cards instead of 10). A variant that is popular in America but disliked by purists is to award the prime to the person with the most sevens, or the person with the most sixes if there is a tie (then aces, and so on down the prime’s rank order).

The game is played until one team has at least 11 points and has a greater total than any other team. It is important to note that no points, including scopa points, are awarded mid-round; they are all calculated upon completion of the round. For that reason, if the current score is 10 to 9, and the team with 10 points captures the seven of coins or a scopa, the team cannot immediately claim victory. It is still possible that the opposing team could end up with a tied or higher score once all points are calculated.

How to Play Briscola

A deck of Italian cards consist of 40 cards, divided into four suits: Coins, Cups, Swords, and Clubs (or Batons).
The values on the cards range numerically from 1 through 7, and there are three face cards in each suit: Fante (Calvary man, Jack or Knave), Cavallo (Knight), and Re (King). A Knave is a lone human figure standing. The Knight is a human figure riding a horse. The King is a human figure wearing a crown. To determine the face value of any numeric card, simply count the number of suit icons on the card. The ace card of coins is usually a type of bird with circle in the middle. Below is a table identifying card rank and point values. Unlisted cards have no point value, and are ranked in descending ordinal value, from seven to two. Note however the odd ranking of the three.

In total, a deck has 120 points. To win a game, a player must accumulate more points than any other player. There is a variation of this point system which assigns the three 3 points (that is, a 4 can beat it), but it maintains its 10 point value.

After the deck is shuffled, each player is dealt three cards (or, if playing only with 2 players, 9 cards are dealt to each player). The next card is placed face up on the playing surface, and the remaining deck is placed face down, sometimes covering half of the up-turned card. This card is the “briscola”, and represents the trump suit for the game. The deal, and game play itself, proceeds counter-clockwise. The player to the right of the dealer leads the first hand (or trick) by playing one card face up on the playing surface. Each player subsequently plays a card in turn, until all players have played one card. The winner of that hand is determined as follows:

Unlike other trump card games, players are not required to follow suit, that is, to play the same suit as the lead player.
Once the winner of a trick is determined, that player collects the played cards, and places them face down in a pile. Each player maintains his/her own pile, though the four- and six-player versions may have one player collecting all tricks won by his partners. Then, each player draws a card from the remaining deck, starting with the player who won the trick, proceeding counter-clockwise. Note that the last card collected in the game should be the up-turned briscola. The player who won the trick leads the next hand. Before the last hand, people in the same team can look at each other’s cards. After all cards have been played, players calculate the total point value of cards in their own piles. For multi-player games, partners combine their points. There also exists a variation whereby the three, is ranked as a three (i.e. a four can beat it) but maintains its status as worth 10 points.